I’m late to the party with Vox. This book received rave reviews earlier in the year but now that I’ve picked it up I’m feeling conflicted. It’s an enjoyable page turner for fans of dystopian fiction, but the ending didn’t meet my (unrealistically high) expectations.

In Christina Dalcher’s fast-paced debut novel, women in the USA have been restricted to just one hundred words a day. Extra syllables trigger an electric shock from counters attached to their wrists.

A new ultra-conservative government has removed women from the workplace and blocked their access to the written word.

Gay people face appalling persecution and are imprisoned in work camps, alongside others who are considered deviant. The new elite claims religious scriptures justify their actions. 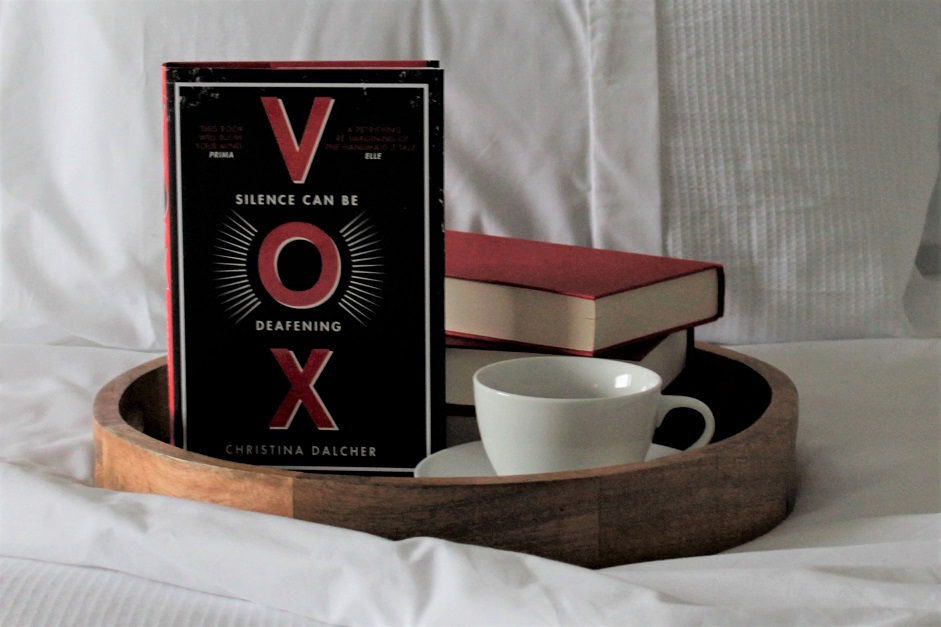 The reader is introduced to Jean McClellan, a white, female, former scientist and mother-of-four. Seething in mandatory silence, Jean regrets her previous political apathy and resents her husband Patrick, who hasn’t fought against her new Stepford-Wife existence.

When the President’s brother suffers a serious head injury, Jean’s life changes. Work carried out by her old team may be his only hope of recovery. With her counter temporarily removed Jean is allowed access to a lab, but she learns that the government’s plans may be even more horrific than she thought.

Vox’s premise is fascinating but frightening – what happens to people when they’re punished for communicating? We’re shown the impact it would have on young girls through Jean’s only daughter, Sonia.

For me, this mother-child relationship is easily the novel’s strongest thread. It illustrates Vox’s true terror; how easy it is to remove rights and opportunities from people who are denied a voice.

Jean’s oldest child, Steven, is interesting in an entirely different way. This teenager champions the abuses carried out by the government and reveals how young people can be drip-fed harmful ideologies. His terrifying fervour gave me chills but acts as a counterpoint to his sister’s oppression.

Vox kept me turning the pages but some sections were occasionally frustrating. I realise the author wasn’t trying to write a long epic, but even with the limited space she had, some characters felt short changed.

Jean’s two middle children are barely mentioned and could easily have been cut from the book. Patrick, her (supposedly) passive, wet blanket husband, is shown to have hidden depths but these were never fully explored (this may have been a deliberate choice by the author, to keep the novel’s attention on women).

Intelligent and occasionally resourceful, Jean herself isn’t unlikeable. She’s a convincing everywoman character who’s happy to go with the flow until she realises just how far her personal freedoms have been eroded. She escapes a number of tricky situations thanks to male rescuers.

Jackie, Jean’s old college friend, who symbolises the proactive fight against the regime, might have made a more exciting protagonist.

Without giving away any spoilers, I can say that Vox’s conclusion left me conflicted. Yes, it’s a satisfying ‘happy ending’ (for a book about a totalitarian regime, anyway!) but the last quarter of the novel felt rushed, as Jean’s struggle is made easier by a number of convenient coincidences. Ultimately, she’s still happy to leave the human rights struggle to others.

Verdict: Vox isn’t my favourite book of 2018 but it’s one I’m glad to have read. It’s not up to the standard of some dystopian literature (I’d say The Handmaid’s Tale is better) but raises important issues about apathy and political engagement. The author adds a scientific twist by drawing on her own professional background in linguistics. If you enjoy this genre, Vox is certainly worth giving a go.