I recently read Anna Burns’ Milkman and the amazing opening blew me away. I realised that the first line can make books famous or ensure readers put them down almost as soon as they pick them up.

Some books, like Jane Eyre, usher in morally-upright, sensible characters with a minimum of fuss: “There was no possibility of taking a walk that day”.

Others open the door to sinister, topsy-turvy worlds. George Orwell’s 1984 gives me the shivers: “It was a bright cold day in April, and the clocks were striking thirteen.”

I’ve gathered together a few of the opening lines that have made me desperate to read more.

The longest opening line in my list and, despite the wordiness, one of the best.

Bring Up The Bodies by Hilary Mantel

“His children are falling from the sky.”

Sad, poignant and slightly frightening. The sequel to Wolf Hall pulled me straight back into Thomas Cromwell’s life.

“Mr and Mrs Dursley, of number four, Privet Drive, were proud to say that they were perfectly normal, thank you very much.”

One of the most famous first lines in children’s literature and possibly my favourite. Anyone so keen to be normal must be hiding something, surely?

I Capture the Castle, Dodie Smith

“I write this sitting in the kitchen sink.”

A quirky, whimsical opening that sums up the narrator.

“I planned my death carefully; unlike my life, which meandered along from one thing to another, despite my feeble attempts to control it.”

I had to reread this sentence twice, Margaret Atwood delivers a shock, then covers it up with something mundane.

Merivel: A Man of His Time, Rose Tremain

“On this day, which is the Ninth day of November in the year 1683, a most singular thing has occurred.”

“The day Somebody McSomebody put a gun to my breast and called me a cat and threatened to shoot me was the same day the milkman died.”

Anna Burns knows how to make an impact. Expect this level of tension throughout the entire book.

“It is a truth universally acknowledged, that a single man in possession of a good fortune, must be in want of a wife.”

It’s the sentence that spawned a million parodies but is still absolutely perfect. A wonderful way to introduce a romance with a hint of satire. 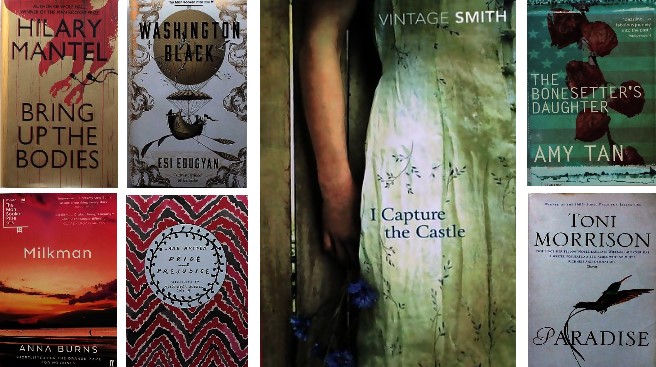 “They shoot the white girl first.”

Wow. An instantly memorable opening that leaves you with so many questions. Who are ‘they’, who’s the white girl and, more importantly, who will they shoot next?

“Last night I dreamt I went to Manderley again.”

The perfect beginning to this unnamed woman’s story. She’s swept away by love before finding herself in a nightmare.

“These are the things I know are true: My name is LuLing Liu Young.”

Wait, so parts of LuLing’s life aren’t true? I was intrigued from the get-go.

“You better not never tell nobody but God.”

Starting a book with a secret that can never be told to another human being is a sure-fire way to catch my attention.

The Hitchhiker’s Guide to the Galaxy, Douglas Adams

“Far out in the uncharted backwaters of the unfashionable end of the western spiral arm of the Galaxy lies a small unregarded yellow sun.”

I first read this aged fourteen and still love the idea that galaxies can have “unfashionable ends”.

“In my earliest memory, my grandfather is bald as a stone and he takes me to see the tigers.”

If the title wasn’t enough to pull me in, this sentence does the trick. I want to know more about this family and (more importantly) more about the tigers.

The Voyage of the Dawn Treader, CS Lewis

“There was a boy called Eustace Clarence Scrubb, and he almost deserved it.”

Poor Eustace! I normally think the writing in CS Lewis’ Narnia series could be better but this line proves parts of it were excellent.

“I might have been ten, eleven years old – I cannot say for certain – when my first master died.”

First master? Something’s clearly horribly wrong in this poor child’s life, but the past tense gives hope. Will things improve? This line made me want to find out.

What’s your favourite opening line in literature? Are there any others that you think I should have included?

9 thoughts on “18 of the best opening lines in literature”